Of farmers, soldiers, workers, and a school bus

Once upon a time Robin Hirsch of the Cornelia Street Café had been an academic, he left it to become an actor and was chosen for the role of the humble bee. Traumatized by this ‘quick descent’ from his early life, Robin was compelled to demonstrate how Mark Moffett’s new book Adventures Among Ants could be used to snap and kill bugs. If host Stuart Firestein had had his way chocolate-covered ants would have been on the menu of the Café for 2nd May. Mark Moffett aka Dr. Bugs and April Gornik, a distinguished landscape painter were the stars of the night. 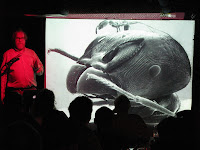 Part of his motivation in studying ants, Mark Moffett admitted, was to get away talking about weird sex and violence in the pages of National Geographic! Gone are the 70s when EO Wilson’s socio-biology got him into trouble, it is now common to recognize that there really are parallels between ant and human behavior. Ants are social and groups of organisms that live together face similar problems. In his work Moffett pulls out patterns he sees in nature, he also observes ‘cool’ ants and rare ones.

Dr. Bugs made a case for the ways in which ant colonies and human societies reflect and resemble each other, prefacing his talk by telling us that ants have been managing waste and making war longer than we have.

Frenzy: Did you know that Boston beat NY as the most frenetic city in the States? Nor did we, until Mark told us. As ant colonies and human societies grow larger the pace of life increases. Small ant colonies with a few dozen members behave like hunter gatherer groups and tend to move very slowly; there is little specialization and the ants might even have a tool chest built into their face so each ant can do everything it needs. The slowest moving ant is the mud ant which eats snails; its jaw will give your drill set at home a run for the money. As human societies grow larger, people accelerate in order to gather information more quickly; this also happens among ants. Ants assess what other ants around them are doing at any moment in order to figure out what they should do. In larger ant colonies communication gets very complex and diverse; army ants move in mats communicating instantaneously. Larger ant colonies also show a great division of labor; the marauder ant, for example, has a variation in size of five hundred fold with each size having different duties. Assembly line and teamwork emerges as the number of individuals increase. Some ants might act as living road fill, others only haul weights, some only carry stuff, and one large ant ferries around the smaller members of its colony like a school bus. In smaller societies teamwork is harder to organize; Mark prove that by showing us slides of a South American ant species with a small colony size that doesn’t display efficient division of labor. Two ants trying to carry a caterpillar pull in opposite directions and manage to squeeze all its juices out like a wet cloth wrung dry. An entire chapter of Mark’s new book is devoted to agriculture. Leaf cutter ants act as fungus gardeners; they evolved agriculture exactly as we did. They weed and use pesticide by culturing their own bacteria. The smaller colonies tend to cultivate fungus that is genetically diverse while the larger colonies have huge monocultures.

Google Earth Ant: Hunter-gatherer groups don’t need infrastructure but as society gets larger these needs change. The same holds true for ant colonies; one species in Paraguay has highways and dwellings rising up 30 ft into the sky. In human terms, that’s as if each colony were living in the Empire State Building. Weaver ants build nests in trees using larvae; it seems they condone child labor.

Toxicology: Whether it is human society or an ant colony, it holds true that with size war gets less personal. Ant societies have army recruitment systems. They even have terrorism: an ant in Borneo attacks the enemy and detonates (see photo of green gooey ant on the right).

It squeezes its body so hard that its gland bursts and throws out toxic material killing enemies. One big difference between the ants and us is that we might use our excess labor for art while ants only use it for war. Like the Romans who put cheap labor up front to be slaughtered, marauder ants put tiny cheap workers in the frontline of battle too. Smaller ant colonies however are more cautious, preferring to fiddle or circle in a ritual, like the honeypot ant, and then separate without mortality. To do this they use tactical deception; in one of Mark’s photo a smaller ant stands on a pebble to appear larger than a bigger ant.

I smell therefore I am: There is a spider that takes on the odor of a colony and is able to live freely amidst ants and eat the larvae of the colony. One of the largest ant colonies in the world, which is to say the largest group of ants that seamlessly merge with one another, is a colony of 1 trillion Argentinian ants in California that extends from San Francisco to San Diego. They maintain a common identity and are turning into a different kind of organism; a super organism that functions more like the cells of our body than as individuals. If you transport an ant of this colony from San Francisco to San Diego it will immediately integrate into the new colony. This colony is now waging war with other species; death toll: 1 million a week. To understand this invasive species Mark went to their original home base in Argentina. Human armies and ants that are perpetually at war will eventually settle on a border after which mortality will go down. In this region however, which is a flood plain, the water levels fluctuate a lot. This drives ant colonies up and down trees and the ants don’t know how to define a ‘no ant’s land’ or stop fighting. 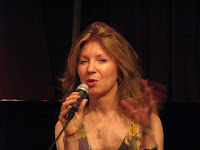 Painter April Gornik who described herself as ‘part of the excess labor force,’ has spent time thinking about nature and trying to figure out the difference between nature and herself. She began as a conceptual artist and then moved to plywood before finally making paintings. Over the years her images started repeating, her obsession with light stayed constant. April’s landscapes are incredibly evocative; some of her early works like Two Rocks (1980) are reminiscent of the symbolist Swiss painter Arnold Böcklin while some others of the French master Corot.

With humor, April illuminated the difference between science and art by showing us a work with a bolt of lightning piercing a water body (Lightning and Water, 1981, Oil on Canvas, 50" x 102," taken from April's site on the right); a scientist had told her that the physics and vision of light wouldn’t work like her painting in real life. She had retorted that she was involved in poetry. Nonetheless, in thinking about art, April has taken inspiration from Heisenberg’s Uncertainty Principle and VS Ramachandran’s work on mirror neurons.

If Mark Moffett hadn’t already put us in our place with the trillion-member alien species so like our own then April’s immense landscapes with their majestic towering rocks, the experience of nature’s fury of thunder and lightning captured on canvas certainly did. We all felt as humble as Robin must have playing a bee. 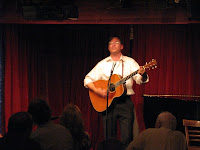 The discussion session with Stuart Firestein was abbreviated by a last surprise: ‘Lacerating wit’ Roy Zimmerman tuned up for his 8:30pm show in our presence. Roy recently visited the Creation Museum and gave us a quick course, Creation Science 101, on his guitar.

Mark your calendars for June 6th and join us on facebook!