Oscar night began amiably with puns on songbirds and robins (a reference to Robin Hirsch of the Cornelia Street Café) at Entertaining Science hosted, this time, by Diana Reiss, professor of Psychology at Hunter College.

Tonight’s invitees were Ofer Tchernichovski, Associate Professor of Biology at CUNY who studies the physiological brain processes than underlie birdsong and Deborah Latz who has been referred to as “one of the finest balladeers of our time.” 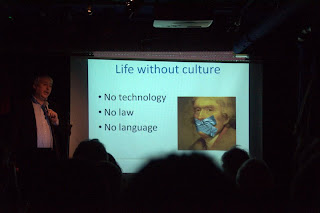 The convivial introduction did not foreshadow the first video shown by Professor Tchernichovski. Asked by the professor to imagine a life without culture, with no technology, no law and no language, we promptly see the title of his next slide “Feral Children,” and the video plays. We see a young woman in a canine posture bark, and lap at a water spout as a dog would. As she shakes her hands as paws and brushes her face as a would-be snout, the professor’s message couldn’t be more poignant. When Oxana Malaya was found in the Ukraine after being raised by dogs for six years she was unable to recognize herself in the mirror. In feral children, nature has performed a "forbidden experiment" that has allowed scientists to pose the questions: Is there a language instinct, and how does culture influence language and thought? Professor Tchernichovski’s forbidden experiment is to study song-learning in birds by looking at birds raised in isolation. Song birds learn to imitate complex sounds at a critical period of their development but lose this ability as they get older. Humans and songbirds are some of the few species with the ability to mimic the vocal calls of members of their group. In the case of most other animals the sounds they make are hard-wired.

To give us the background for interpreting the Tchernichovski Lab experiments we heard bunting “dialects” from different regions and then the birdsong of birds raised in isolation. These isolate songs are very different from one another, having only one thing in common, they are less structured than the songs of birds raised in normal social surroundings.

In one experiment birds raised in isolation were later exposed to each other. A year after this exposure an isolate male finally mated with a female and started a family. Professor Tchernichovski played us the song of the male isolate founder and then offspring from the first generation and after three generations. You can hear the three birdsongs here. The lab also used recursive training, exposing a young bird to an isolate and then using this young bird as the “tutor” of the next generation to see if the songs would evolve into normal song patterns. Surprisingly, they did. Unstructured songs with bizarre elements settled quickly into more normal patterns with successive generations. The lab has studied and analyzed songs looking at features like duration of syllables. They compared the song of the pupils of the isolates (who mimic the isolates) with the songs of the isolates themselves and found these were neither quite “normal” nor quite like the songs of the isolates. Across generations songs become normal in three to four generations. How so? Sounds that are very long in the isolate get shorter in the version of the pupil (a duration of 270 millisecond being the cut off point). Here.

The birds at the lab raised in a controlled social environment have also been studied by neural imaging with fMRI. These have shown that male and female brains respond differently to songs. Male isolates hearing songs of other birds showed no consistent preferences whereas female isolates reacted like the male birds who had been exposed to songs. In other words, as Professor Tchernichovski put it, “an isolate female is as good as a trained male.” Females don’t sing but they inherently like “normal” songs prior to any experience whereas males seem to need fine-tuning. “Culture is encoded in the eggs of the founder.”

After a brief break Diana Reiss confesses that she always wanted to be a singer as she introduces Deborah Latz. Deborah in turn had always been interested in studying dolphins, one of Diana’s research areas. Deborah, one of Cornela Street Café’s favorite songbirds, had us laughing when she began with a reference to the previous speaker: I am a female and I can sing as a human being! And with such verve! Deborah Latz is trilingual and sang in French, German, and English with Daniela Schaechter on piano, Oleg Osenkov on bass and Elisabeth Keledjian on drums.

The culture for music may not be encoded only in the eggs of birds but it possibly in us too. Regardless of the languages in which Ms. Latz beautifully sang, the audience resounded their applause. Birdsong evolved as a means of attracting the right mate - a kind of sexual selection that may help propel evolution. Part II of the evening made us ponder how powerful music is in the evolution of our own culture. The back and forth between pianist and singer, vocalist and cellist, the harmonies that accumulate and build on one another, creating something unique and in the moment that could never exist except then and there. And of course the appreciation of the audience as a kind of celebratory feedback that furthers art and culture. We didn’t record her at the Cornelia Street Café that night but she has performed with two of the same musicians before in NY.


Diana Reiss kicked off the Q&A section by asking Professor Tchernichovski if songbirds tune up like Deborah Latz. Yes, they do! Deborah Latz said that when she improvised she was inspired by African song. Asked what she learned first in a piece of music Deborah Latz responded that it was melody. And she always tries to make a piece her own as she did that night with “My favorite things.”


On that note our evening at Cornelia St ended. In parallel to our evening's events, the Oscar for best documentary had been awarded to The Cove, a film in which our hostess, Diana Reiss, had participated as a technical science advisor. Dolphins recognize themselves in the mirror, learn vocal signals by imitation (like songbirds and children), and can communicate using underwater keyboards with their beaks. Professor Reiss (link to interview) found out about the Dolphin Drives when she published her paper on dolphin self-recognition and later asked Louie Psihoyos the director of The Cove when she met him at a marine mammal conference to make a film on the brutal killing of dolphins in Japan; her own diplomatic efforts with the Japanese government since 2001 yielded no fruit. Though the film has not changed the harvesting of dolphins, art and science together might be able to with your help.