Monoculture in wheat and music


PROGNOSTICATING THE WORLD'S WHEAT AND BLUEGRASS on Superbowl Sunday was hosted by Dave Soldier. At the start of the evening Robin Hirsch challenged Dave to link wheat and bluegrass. According to Dave bluegrass music was always based in the idea of agriculture; it was invented by Bill Monroe in Chicago in the 40s who was remembering his home in Kentucky, the bluegrass state. More profoundly, Dave Soldier also pointed out that the real danger to our food source today is not GMO but, as Susie Dworkin’s book illuminates, monoculture. Frank Oteri and the String Messengers are protecting against the monoculture of music. Dave Soldier knows about the culture of music; he is a composer and musician whose projects include music by an orchestra of Thai elephants.

Susie Dworkin is the author, most recently, of The Viking in the Wheatfield. Her talk on wheat disease and the state of agriculture research was entirely gripping. 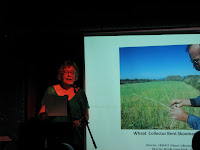 Wheat supplies 25% of humanity’s calories, hence when Norman Borlaug developed certain kinds of wheat resistant to stem rust these were dubbed the “Wheats of the Green Revolution.” They were estimated to have saved some 1 billion people from starvation. Stem rust blows in the wind, hides in animal paws, and in pant cuffs. It descends, depending on wind and weather, into wheat fields.
The hero of The Viking in the Wheatfield is Bent Skovmand, a Danish plant scientist who came to work for Borlaug in the 70s at CIMMYT in Mexico. For 50 years the genes bred into wheat to resist stem rust worked, but in 1999 a scientist spotted the disease again. Named UG99 for Uganda where it was seen, it decimated the Rift Valley and made its way through Yemen. By 2004 it had reached Iran and spun off 4 new races. Between 80-90% of the world’s wheat would die if it were exposed to UG99. 50 million small farms in India & Pakistan grow half of the world’s wheat followed by China, Ukraine, France, and Kansas. The threat of UG99 however remained a scientific secret. Norman Borlaug, sick with leukemia, went to Washington and pleaded for more funding for research which was about to be cut; he asked for, and was given $25 million to save 25% of the world’s calories.
Luckily UG99 hit Iran during a drought buying time for agricultural scientists. Their challenge was immense: Re-breed all of the world’s wheat. They would have to use tissue culture, molecular markers, shuttle breeding, gold pellets, and all the microbiological tools of their tool box; they would have to overcome political obstacles and war. It would still take 10 years to breed a new variety to share with the world. 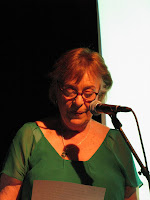 The big challenge to agricultural research today is the need for funds. After the Supreme Court decided that products of life could be patented, the World Bank and other public institutions started to turn agricultural research over to private companies. This also led to a brain drain among scientists. The private sector’s agriculture research interest was determined only by commercial considerations. Some of the positive outcomes of this were herbicide-resistant soybean which helped Brazil & BT Cotton which helped India become world powers. Half of American plant breeders work on corn and 70% of all the world’s breeders work on patented proprietary genes. The sad truth: A cloud of stem rust pores heading to small farms makes no bottom line difference.
With the world population touching 9 billion by 2050 and 25,000 people per day starving to death today the planet needs a secure food source. Many of the people fighting UG99 are heirs to Skovmand and are looking for the best possible genome to fight stem rust. Genes are stored in gene banks; there are over 20 in the United States alone. In a sense, Skovmand was the central librarian for the wheat breeder’s of the world and he never had enough funding. At CIMMYT he ‘collected and cataloged, multiplied, exchanged and shared thousands of varieties of wheat, its progenitors, spinoffs and its copycat weeds.’ At the Cornelia Street Café, Susie Dworkin story unfolded how the Bill & Melinda Gates Foundation came to the rescue at a critical time. Skovand’s lab in Mexico has since worked successfully in collaboration with scientists everywhere. Today a nursery in Turkey has produced 100 lines resistant to UG99 and has sent that out to 30 countries.
But UG99 is still mutating and it well get resistance genes eventually; it showed us that we might actually, as a planet, destroy our ability to grow plants and deplete our resources completely. In a way UG99 was a colossal starting over. There is a doomsday vault the border of Norway and the Arctic Circle where all countries have deposited their seeds, just in case…
Susie Dworkin left us with two big questions that we must collectively answer: Who will guard us against hunger and preserve nature’s diversity? Who owns and controls plant genetic resources? 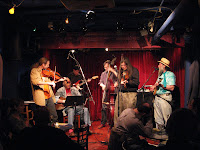 After this sobering talk we needed Frank Oteri and the String Messengers to remind us that if we might bring ourselves to the verge of depletion then maybe we might resist and survive. Our culture, our music, and our creativity are possibly all we have.
The String Messengers featured Frank York on fiddle and lead vocals; Mandola Joe York on bass vocals, mandolin; Jeff York on atomic guitar; Jon York on middle fiddle; Uncle Murphy on additional vocals and rhythm guitar; Ratzo York on the larger-than-life bass fiddle, with extra strings. The performance was so incredibly spirited that some strings even came undone from the violin and the bow of the cello.
The String Messengers nourished us with their wide repertoire. ‘Being vs Seeing’; ‘Tout va bien’; they performed a nuclear number called Atomic Power (a 1979 CBGB’s sound according to Soldier); in ‘Mole in the ground’ Ratzo York (Ratzo B. Harris) got under 40Hz with his cello (diagnosed once again by Soldier). They performed a piece by Frank Wakefield from the NY bluegrass scene.


A short trialog between Susie Dworkin, Dave Soldier, and Frank Oteri followed the performance. Metaphors of music as sustainable crop and planting new seeds abounded. Frank discussed that the String Messengers are reluctant to call themselves a Bluegrass group because they aren’t typical. Joe’s mandolin is not the typical bluegrass mandolin and the group doesn’t have a banjo player (they fight too much). They avoid being orthodox, even the fiddle is a 19th century fiddle which has been genetically modified with a pickup. 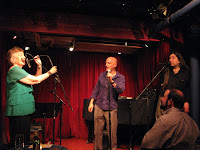 The evening ended with Susie Dworkin inviting the String Messengers to sing at a foreign relations event!
Mark your calendars for the 2nd of May when Stuart Firestein hosts Mark Moffett, “the Indiana Jones of entomology,” and April Gornik, one of America’s most respected landscape painters. Join us at the Cornelia Street Cafe at 6pm and on facebook.